A human brain is an amazing instrument. It combines huge data storage with massive real-time processing. According to Scientific American [1], the memory capacity of the human brain was reported to have the equivalent of 2.5 petabytes (2500 TB) of memory capacity. This number was obtained by estimating how much information can be stored by 125 trillion synapses in the cerebral cortex. 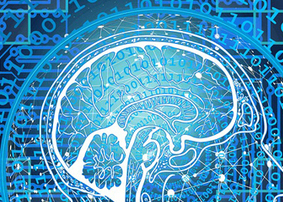 In fact, one can estimate on the “back of envelope” of how much information our brain receives during it’s lifetime. A human eye has about 576 megapixels [2]. Assuming that a human can process about 24 frames per second (fs) [3], with 3 bytes per pixel, (typical for a color image), this would give the following recording speed:

Now, assuming 2500 TB of total storage, our brain can hold visual information for about 62500 seconds. This is about 17 hours of information. This totally ignores other recorded information, such as smell and hearing. Thus we stay on the conservative side in our estimate. 24 frames per seconds is also quite a conservative number. There are reports about humans who can detect information up to 100-1000 fs.

A human lives for 75 years on average, but spends about 25 years asleep. Therefore, the expected total time of visual recording by a human is 50x365x24=438000 hours. How can we reconcile this huge recording time with the tiny capability of our brain for storage?

One may guess that the human brain does not store the “raw” pixel information. It compresses information and, maybe convert to some other objects. It also removes unused data. First, let us say that compression of information by a factor >20,000 is completely out of reach for modern technology (the best we can do in the computer industry is a compression of visual data by a factor 10). It is not realistic to expect that our brain can perform such “heavy-lifting” compression.

Let us assume that we only keep “reduced” or “slimmed” information. For example, the full frame image is converted, say, to 5M pixels recorded with 1 fs (one frame per second). In this case, 2.5 petabytes of memory should be sufficient. But this is also unlikely. A human can revive memories with significant details and can recover real-time sequences of memorized events.

It is also possible that a lot of recorded visual information gets lost during one’s lifetime. However, recovered-memory therapy shows that one can unlock, with very high accuracy, very deep memories of childhood.

One idea among others is that we do not keep the information as “video” in a computer, i.e. in frames with pixels. Our long-term memories are “traces”, “contours” and “shapes” of visualized objects. Our brain keeps a database of object properties (colors, patterns, smells etc). The number of objects experienced by a human during the lifetime is not astronomically large, perhaps, several million objects. Assuming several hundred of kilobytes of raw data per object, such database is not very large. When we recall past events, we reconstruct the scenes in full detail. Our brain adds colors and fills missing details to the traces of the past using this databases. Clearly, keeping traces of images does not require much storage either. This is not too different from what happens in computer games.

But how are “missing” details added? How does this reconstruction mechanism work? The problem with this method is that very small details, full of colors, can easily be recovered by humans without making any assumptions on how small details and colors are expected to look like. There is another problem with this method: when we try to recall something in the past (especially under hypnosis) we usually relax. This has nothing to do with intensive “calculation” when the brain tries to rebuild and visualize your memories. It looks more like the brain tries to retrieve the information from a source, rather than to perform intensive calculations to reconstruct the scenes. Unless such a reconstruction is so “hard-wired” by the evolution that we cannot even notice massive computations.

There are lot of things we do not know about our brain.

Or maybe eastern philosophy is right? Our brain is not a keeper of information, and it is not a generator of thoughts at all. Instead, it is a transmission and receiver of thoughts.